Subtitle: Two Temples and a Mystery

Located in Northern Thailand, the city of Chiang Rai is about a three-hour trip from Chiang Mai and home to a couple of temples that warrant a day trip. Wat Rong Khun and Wat Rong Suea Ten, known as the White Temple and Blue Temple respectively, are typically at the top of any ‘must visit’ list if you’re near Chaing Rai, and for good reason.

Wat Rong Khun (the White Temple) is maybe, because of its stark white color, one of the most recognizable Buddhist-style temples in Thailand, and like any good religious shrine should be, is steeped in symbolism. Constructed with plaster, the white color is meant to refer to the purity of the Buddha.

What you can’t tell from far away and in pictures is this: that the temple shimmers like a jewel.

My friend and I gasp a little as we walk towards the temple, taking in this new effect. Like a huge, temple-shaped diamond, the temple gleams more with our every step. Getting closer, we see the trick. Tiny, hand-cut pieces of glass all over the outside. The pieces of glass are said to represent the Buddha’s wisdom and teachings, which I love. That the designer of the temple, a famous Thai visual artist named Chalermchai Kositpipat, used a transparent, reflective surface to represent the Buddha’s teaching is such a staggering genius use of metaphor that I am still working on it. Doesn’t Buddha basically say, “look deep inside, clean your soul up, find the love in yourself and others, and reflect that love out through your thoughts, words, and deeds”? I’m oversimplifying, of course, but I still maintain the artist is a genius.

And the fun doesn’t stop there. To get to the temple, (which is just beyond the “Gates of Heaven”;  more on that later), you must first cross a bridge aptly named the “bridge of rebirth” which spans over a small, man-make lake. Before you start to cross over the water, there is a place where both sides of the bridge are lined with human hands reaching up towards this sky. This is said to represent desire and human suffering. In other words: hell. You have to cross a symbolic hell to enter heaven.

The journey over the bridge is an artistic representation and manifestation of the human journey through the spiritual traps of temptation, greed, and desire and from life, to death, to rebirth into a non-suffering existence.

The restroom building, down to the toilets, is pained a gold color and just as intricately and ornately detailed as the other buildings. You might ask: why gold? I would then ask you what do humans often chase at their own physical and emotional peril?

According to the guide and the temple’s website, the golden toilet building is representative of man’s quest for fortune, fame, and other worldly desires. It’s also said to represent the body, whist the white temple represents the mind.

I’m telling you. Genius. And jaw-droppingly stunning to look at. As someone who lives for metaphors manifest in real life, I am particularly enchanted with this temple.

Before entering a temple or mosque, it is customary (and required) to take off one’s shoes. While the practice is predominately for hygienic purposes, it’s also symbolic and transcendent. Taking off and leaving dirty and soiled shoes outside can be looked at and thought of as removing (get it? Yay symbolic metaphor) and detaching oneself from earthly burdens before entering a space of worship and spiritual contemplation.

I had initially encountered this practice while visiting the temples of Little India in Singapore a couple of years ago. The first couple times taking off and leaving my shoes had felt a bit awkward, as I am a big proponent of shoes in public places, but I instantly realized its equalizing and tranquilizing effects. Bare feet literally put everyone on the same footing, and it immediately humbles one in what is meant to be and should be a humbling place. I start to wonder what might happen if churches required worshippers to go sans shoes in front of the cross? For me, it is hard to be anything other than reflective, present, and more gentle when the flesh of my foot soles is touching the ground. Is it coincidental that both Buddha and Jesus are depicted without shoes?

The other thing I find equalizing, humbling, and fascinating is the fact that the only seating in Buddhist or Hindu temples is in the form of benches or chairs up against the walls. No pews. The reason to go is worship, right? So the Hindus and Buddhists take it straight to the ground. You bow or sit on the floor.

In the White Temple, I watch mesmerized as a gentleman in a wheelchair is wheeled up towards the large Buddha in the front by who I am assuming is a family member. Maybe a son or nephew? The older gentleman is gingerly helped out of his chair. He then takes his time to steady himself, his arms and legs wobbling slightly and his body bending with age like human crescent moon. He eventually kneels down on one knee, bowing his head. The younger man helping him stands back a half step, resting one hand on the wheelchair to steady it, and patiently waits. Although there is a veil of light chatter fluttering around, this man is completely absorbed in his act of devotion. I feel slightly voyeuristic watching him, but the whole process is one of the purest acts I had seen in a long time. 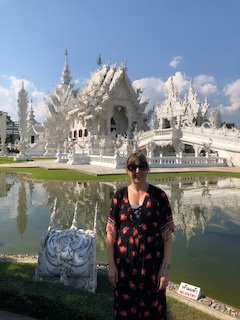 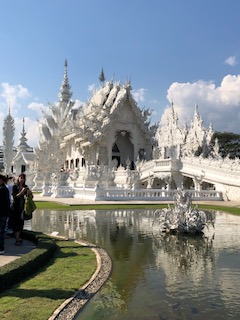 view while crossing the bridge

Ever since this place started popping up on all the copious travel-inspired Instagram pages I follow, I knew I wanted (needed) to see it. Also located in Chiang Rai, Wat Rong Suea Ten is (yet another) gorgeous and ostentatious Buddhist temple in fabulous golds and vibrant cobalt blues inside and out.

While white represents purity, blue represents wisdom. Blue also conjures up the notions of sky and heaven, the limits of which are not known. As is the case in many temples, the colorful walls depict scenes tracing the spiritual and physical journey of the Buddha.

The large white Buddha at the back of the temple is pictured seated, with his right hand palm up to the ether, resting on his knee, which is left fingers touch the ground. The hands represent trying to strike balance between surrendering to wild and unbridled universe (palm up) while grounding oneself to a personal, spiritual center (fingers on the ground).

Virtually every Buddhist temple I visit has two ornate statues of a serpent on either side of the temple entrance standing guard, and the Blue Temple’s serpents are as impressive as the temple itself. The two Naga, meaning “snake” or “serpent” in Sanskrit, are thought to be semi-divine protectors of the temple.

Have I mentioned how much I love metaphors and symbolism? 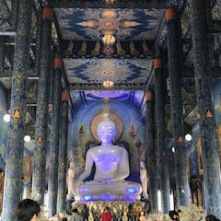 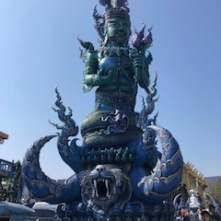 And a Mystery: the Jim Thompson house in Bangkok

Off a tip from a friend, I visit the Jim Thompson house in Bangkok, and I am not disappointed. I had not heard of Thompson before, but the website boasted gorgeous pictures of his house-turned museum and collected objects d’art, so I was intrigued. Though his most famous moniker is the “Thai Silk King” after basically being responsible for turning the rest of the world on to gorgeous hand-spun Thai silk in the 1950’s and 1960’s, he was also a WWII veteran, a CIA operative, an architect, and successful businessman.

At the time of his disappearance, he was the most famous American in Thailand.

His bed, the dresser, kitchen ware and other knickknacks are still displayed in his gorgeous, handcrafted house. The place definitely has a supernatural vibe about it, and it isn’t until our tour guide is telling us about a couple of specific items still hanging on the wall that I learn about the mystery surrounding his disappearance.

Still hanging on the wall of his bedroom right above his desk are two framed horoscopes from the ’50s. Pointing them out, the guide explains that good luck is predicted in one of the horoscopes for the year 1959, which is the year Thompson had moved into the house. The other horoscope predicts back luck for him in his 61st year. No need to google; I’ll tell you. Born in the year of the Horse in 1906, on Sunday, March 26th, 1967, in his 61st year of life, Thompson takes a walk while visiting friends in Malaysia and is never seen or heard from again, nor is any body ever found.

The mystery has never been solved, though many theories have been floated, as Lary Wallace outlines in his great piece in the Paris Review called Silk Thread: The Strange Mystery of Jim Thompson.  Did Thompson get lost and run out of food and water? Extremely unlikely. He was a war veteran and ex-CIA operative. Dude had skills. Mauled by animals? Kidnapped? Possible, but no remains, not even bones, were ever found. Kidnapped? Maybe. Assassinated by the US government? While there is no proof of involvement on the part of the US or Thai governments, Thompson was an extremely vocal critic of the Vietnam war,  putting him on the US government’s naughty list, and he wasn’t exactly popular with the Thai government either. Only Thompson and the jungle know for sure what happened that warm and humid day over a half century ago.