If you know me even just a little bit, you know that I’m obsessed with basically only 2 things: Prince and Paris. So, while Paris is not a new-to-me city, I couldn’t not acknowledge it in my 50 Before 50 quest, as I will tack on two new cities while in France.

Where to start with my beloved Paris? It’s funny because Paris is far from perfect, as will be explained, but, for me, at least, the charms outweigh the petty inconveniences. To fill you in briefly on my current trip, I arrived in Paris on 5/31 and departed on 6/3 by train for a very small hamlet of a town a few hours away called D’Orquevaux, for an artists residency where we live and eat in a real chateau built in the 1700s. Much more on this in a separate post.

While in Paris, I decided to stay in possibly my favorite neighborhood anywhere: Montmartre. It’s the artisan/hippie/bohemian/red light district of Paris and is full of fun and funk. Home to Picasso, van Gogh, Toulouse Lautrec, Monet, and countless others, it’s sort of the artistic heartbeat of the city.

It also has one of my favorite monuments ever: the Basilique du Sacre-Coeur. The Sacred Heart Basilica. Sitting at the top of a small, but very steep hill, the Sacre Coeur dominates the northern skyline of Paris. Built as a place of worship for the Catholics, it is, according to most lists, the second most visited attraction in Paris, after the Eiffel Tower. Architecturally, it’s a mash up of a few different styles, such as Roman and Byzantine; it’s a striking and gorgeous structure. But my favorite story involving the Sacre Coeur takes place during the second world war. According to historians, a total of 13 bombs were dropped in the vicinity of the Sacre Coeur, but the the building itself was never hit. In a fascinating article entitled “Dark Days in Paris, the City of Light”, author Gene Santoro explains how, once Hitler began losing the war, he ordered the destruction of the Sacre Coeur, because of its beauty and cultural significance to Paris and France. It was to be a blow to one of the jewels of the city, as well as to the proud, French morale. After 13 tries, the only damage done to the Sacre Coeur was some broken stained glass windows. Viva la France.

Because the spot is indeed touristy, there are the obligatory swindlers hanging out ready to separate you from your euros . I stopped for a few minutes as a small crowd was gathered around a man who was working that ancient hustle known as ‘three cups and a ball’, where he shows you as he places the ball under one of the cups and then moves the cups around quickly so that you will lose track of which cup the ball is under. A woman watches, bets, and wins to cheers. Another person watches, and again, wins. If you pay close attention, it is doable. But then, ah, le scandale…the hustler, getting a little tired of losing money, starts his sly cheating. Here’s how the next few rounds go down. Would-be better approaches and watches. Once the hustler has gone through the moving of the cups sufficiently, the better, confident in their bet, goes for the wallet or purse. It is during this time the hustler, trying not to attract attention, quickly and slyly slides the middle cup out and around of the other cups, creating a new line up. The would-be better has not seen this, points to what they believe to be the winning cup (which it was), and the hustler quickly takes the money, reveals the now empty, losing cup, which provokes jeers and light scorn towards the hustler. A few of us throw up our voices and hands in indignation, but the hustler is unruffled. After a few rounds, there’s nothing left to do but shrug and move along. Viva la France.

One new thing I did was attend a show at the Moulin Rouge, a world famous cabaret which opened in 1889. A variety act type show with splashes of vaudeville, burlesque, Cirque du Soleil and circus, I highly recommend it. Since I was flying seule, I was seated at a table for 6. There was one gentleman who apparently had someone bail on him and a group of 3 women of a certain age from California. Talking with them, I learned that one of the ladies had never left the USA before this trip. The fact that she was now here made me ecstatic, as I am a big believer in travel as a necessary means to learn about the world, our fellow humans, and ourselves. The world is so vast and wonderous, how on earth can we not want to explore at least some of it beyond our own towns?

But back to the topless ladies on stage…I mean, this is the Moulin Rouge. Truth be told, there is absolutely no narrative flow to this variety show, but that doesn’t really matter. Half the fun is wondering what kind of act is coming up next. I call this type of show a primarily “shine and strut” show where the focus is on spectacle (in this case, lavish)  rather than heavy emotional impact, but there are a few moments that really awed. I think my favorite act was the roller-skating duo. Think of those jaw-dropping ice-skating sequences when the gentleman dangles the woman from a wrist and ankle as she whirls inches from the ground or when the woman’s feet are perched behind the gentleman’s neck, her head inches from the floor and his hands simply extended by his side, not securing her. Now imagine all of this done on a circular platform of about 7 feet in diameter.

Close behind this is the contortionist of unbelievable flexibility and the woman who swam with snakes. Yes, there is a big water tank hidden below the stage that is revealed, used, and then disappears. Something for everyone.

Still buzzing from the energy of the show, I hurried down into the metro stop and towards the platform just as a man had situated himself in a tiny corner with his back to passers by in order to, um, relieve himself. I chuckled, shrugged, and kept moving. Viva la France. 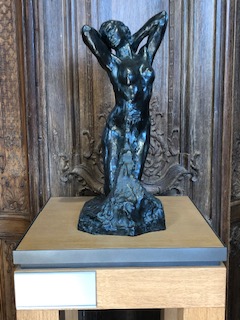 “The Awakening” by Rodin 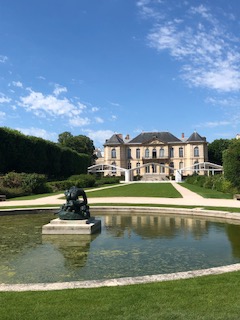 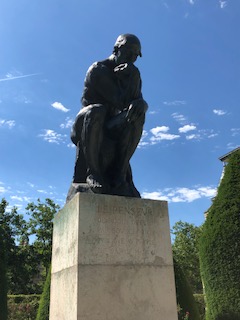 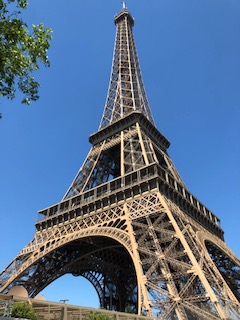 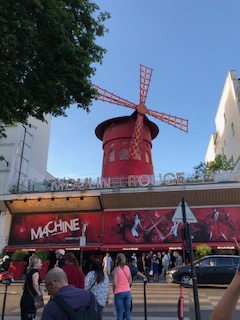 This is as close as you can get to Notre Dame right now.